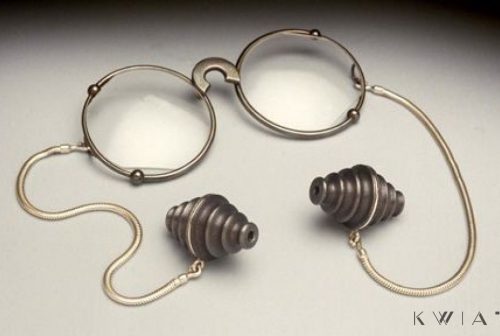 Today we take prescription frames for granted… when and how did people invent the so valuable for our vision impairment tool? It is said that even the Roman philosopher Seneca (4 BC – 65 AD) used a glass globe filled with water as a magnifying glass to read “all the books in Rome.” Later, in the 13th century, world-renowned Venetian glassblowers produced thick-glass “reading stones” set in a horn or wood frame that closely resemble today’s magnifying glasses.

Most historians believe that the first eyeglasses were made by craftsmen in Pisa (others claim Venice) around 1285-1289. They consisted of 2 round shaped glasses, framed with bone, metal or leather that can be well balanced on the nose bridge. The credit for this invention goes to the Italian Salvino d’Amarte. We find evidence in fine art, particularly in the work of Tommaso di Modena from 1352. His painting depicts monks reading/writing a manuscript. One of them is using magnifying glasses, but the other is wearing frames.

It is argued that the first eyeglasses could only deal with myopia and visual impairment in older people. Short-sightedness wasn’t able to fix until the beginning of the 15th century. The first frame temples appeared in Spain at the beginning of the 17th century. They were silk ribbons tied to the frame of the glasses which were attached to the ears with a loop. Spanish and Italian merchants brought these temples to China, and the locals modified it by tying 2 small metal weights to the ends of the straps. Temples as we know them today were created in 1730 by the English optician Edward Scarlett.

Poor road visibility is a major problem for every driver, and vision is a critical factor in driving safely. Of…

The sunglasses should be replaced every two years

For the period of two years the UV rays damage the lenses and they begin to let it through, according…

Paco Rabanne – one of the legends of fashion and design in XX Century…….

The security of the traffic depends not only on the technical characteristics of the car and driver’s qualification, but on his sight: through the sight driver gets 90 % of the information that is needed for secure traffic………

Kwiat Ltd. is an official distributor of the polish optical factory JZO.